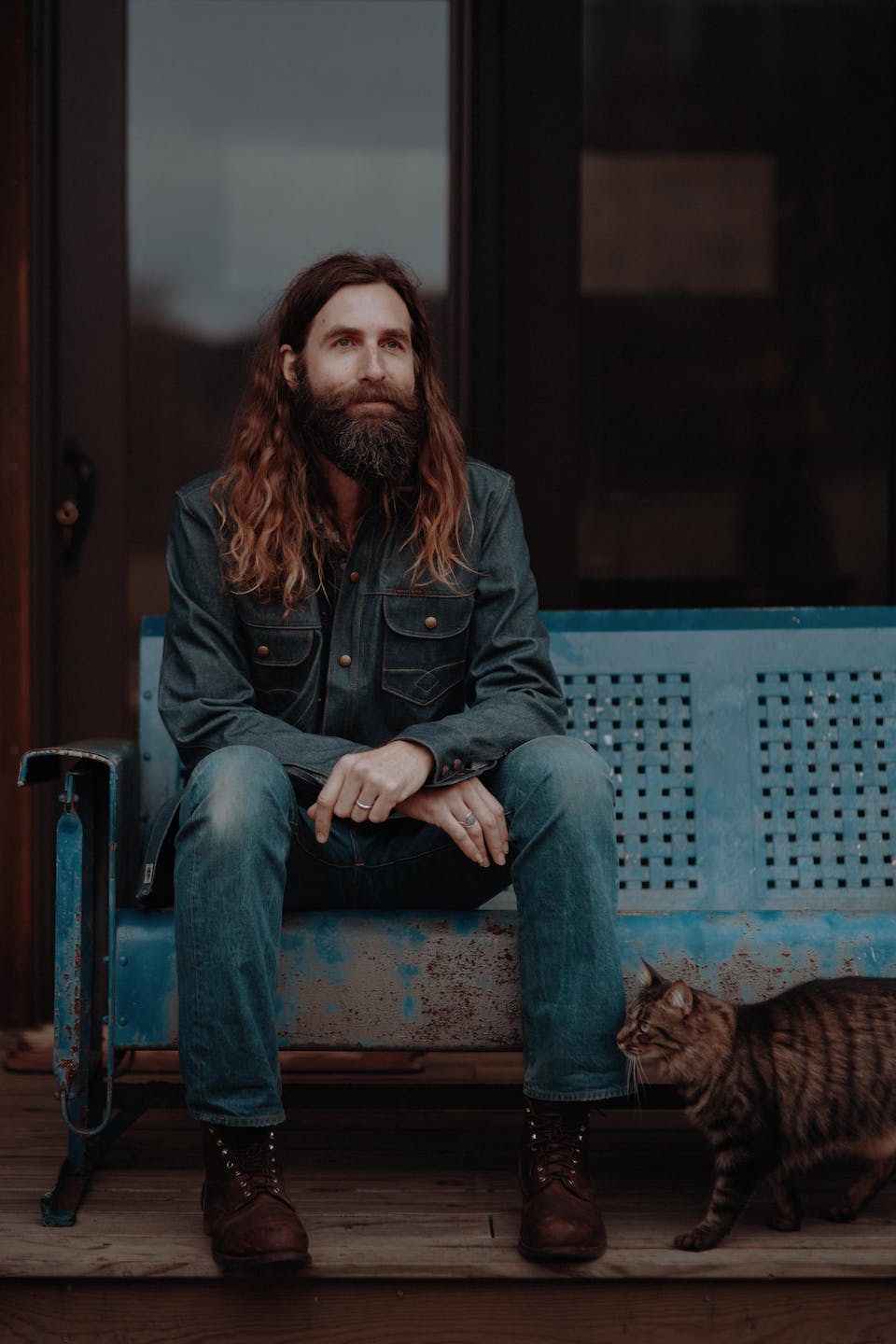 As the naturalist John Muir wrote, “In every walk with nature one receives far more than he seeks.” It is for this reason that musician Tyler Ramsey goes into the woods when he is writing, and why he and his wife have settled on a plot of land many miles outside of the nearest city of Asheville, North Carolina, to raise their young daughter. For Ramsey, living deliberately and with a little space, removed from distractions and the allure of needless consumption, is how he feels most creative and at ease. And while writing For the Morning, his first album since 2011’s The Valley Wind, Ramsey tapped into that insulated world where imagination flourishes and sounds for mining are plentiful to create his most realized and regal work yet.

The Ramsey home is surrounded by mountains, fields, and trees, and a small river winds through it all. Wild animals live in the family’s forest, paying daily visits to sing their own songs. Ramsey’s hand-built music studio affords him a shelter from the cacophony or a chance to join the chorus, depending on whether or not he has the windows open. The things he does at home are the things he sings about in his songs—neither costumed nor fabricated—and in keeping with his deliberate existence, he clarifies that his lifestyle is not a badge to be worn but simply his preference.

“Spending my time here in North Carolina, swimming in the stream and walking around in the woods, it’s part of my character as a musician,” Ramsey says. “We live out in the country, I built my own studio. Out here, you have the ability to take your time and work on things slowly and comfortably. These are reasons why the music I make sounds like it does.”

For the Morning is filled with instrumentation connecting the listener to this setting: radiant acoustic piano and stark, dexterous guitar fingerpicking; lilting, poignant pedal steel and gentle, babbling beats that mosey rather than rush. We are transplanted to Ramsey’s woods even before any words can take us there. But, as he reveals, the process that brought the album to life wasn’t just one sunny stroll in the pines—a newborn baby and a professional musician’s touring schedule create their own challenges. So, it was up to Ramsey to find a balance, and he learned to take advantage of any fleeting moments of stillness whenever possible, while also using his time on the road as its own form of inspiration.

He wrote what would become the first song for the record just after the birth of his daughter. As a way of keeping her calm during the long nights he would wear her on his chest in a baby carrier while playing piano, and the gentle, rhythmic chords would lull her to sleep. Of course, the family rooster, Pip, did not help matters, but such is life in the wild. Despite his exhaustion, a melody and words came to Ramsey quickly, written abstractly about coming to terms with his own sleeplessness, and he called the song “For the Morning.”

“I’d never been a morning person, but I became one because I had to,” he says. “Our daughter was up all the time, and our rooster starts crying at 4:30 in the morning. It’s just our world now, everything starts before the sun comes up. But that shift in my life created a song I was happy with, and the other songs came pretty quickly after that.”

While at home on the musician’s equivalent of paternity leave, Ramsey took to the woods whenever possible, finding inspiration in his familiars as well as in his footsteps. Carrying a notebook and humming guitar lines into a recorder, he worked the songs out viscerally in nature before returning to his studio to record home demos. And oftentimes, once there, his playing would transcendentally transport him back to where he’d been. “I do find the rhythm of walking helpful for working out song ideas, and the only thing anywhere close to the meditative aspect of hiking for me is playing acoustic guitar,” he says. “I can sit and play guitar for a couple hours, or go for a hike, and take myself to another world. Some of the images from these songs are visual cues that turn into parts of stories I’m trying to tell. When I’m singing them on tour, I have that visual in my head; it gets attached to the piece and never really separates.”

But for as much as he prefers to spend his time at home, his past decade was spent largely away from it. As guitarist for and co-writer with the rock group Band of Horses, Ramsey found himself on the road constantly, forced to make temporary shelters inside of hotel rooms and bus bunks. After ten years with the band it was time for a change, and Ramsey seized the opportunity to pour all of his creative energy into his solo work. It became natural, then, for some of his new material to explore that dynamic of being away and creating a respite wherever possible.

“Parts of this record were written on the road, back and forth and on airplanes and in hotels while traveling,” he says. “Some of it comes from the endless touring and that feeling you get after a while of not knowing where you are, and longing for your home and child.” The song “A Dream of Home” is a product of that perspective. On a day off during a Horses tour, Ramsey holed himself up in a hotel room outside of Nashville and began writing about that familiar tug of greener grass on the other side, wondering if following every musician’s dream of touring the world to play for huge audiences was actually all it was cracked up to be. “A lot of people see the touring life as glamorous, but there are plenty of times where it’s hard to keep up. It becomes difficult to miss your family that much, and you want to be around your newborn child rather than sitting in a room ten hours away while knowing you won’t be home for three more weeks.”

And so, following his exit from the band and free to follow his own music full-time, Ramsey took an album’s worth of demo songs to La La Land studios in Louisville, Kentucky, where he, studio engineer Kevin Ratterman, and Ramsey’s longtime friend Seth Kauffman, the crack session and touring musician (Jim James, Lana Del Rey, Ray LaMontagne) who fronts the North Carolina band Floating Action, set out to record. The trio fulfilled the majority of all sonic duties during this tracking phase, with Ramsey’s demos serving as blueprints as they pieced songs together during the first weeklong session. Ramsey, Ratterman, and Kauffman would return to the studio again for another shorter period to flesh out those recordings, and one final day in friend and former Band of Horses bandmate Bill Reynolds’s Nashville studio finished the job. The process was complemented by spots from several guest musicians, including Joan Shelley, Thad Cockrell, and Molly Parden singing harmony on various songs, the pedal steel player Russ Paul contributing several solos, and Gareth Liddiard from The Drones on guitar. “I’ve learned through the years that calling the right person for the right part is so important,” Ramsey says. “While I love picking up an instrument I don’t know how to play, bringing in someone who really knows how to play it can make something far cooler happen. The guests filled these songs out perfectly.”

For the Morning comes together seamlessly as a cohesive work from a master songwriter and musician. “Breaking A Heart” joins the aforementioned “Dream of Home” as a standout, with sublime piano chords and beautiful guitar playing urged along by upbeat drum tracks, Ramsey’s pristine vocals left hanging in the air like mist. The lament of the former tune is one not uncommon in Ramsey’s work, and he notes that many of his favorite songs—his own or by others—are dotted with sadness. “I do gravitate toward sad music, and heartbreak is a part of the songs I write,” he says. “Writing a song is this huge emotional release and it can be very intense. There’s a lot of melancholy in what I do.”

“Firewood” is one such number, a somber song written in suites with a heaviness that gradually lifts as it moves through its parts. Written on guitar, it came out of what was an instrumental piece before Ramsey found its vocal pieces and story while in Ratterman’s studio. “It’s a heavy, dark song with a positive twist at the end,” Ramsey says. “It comes from that feeling of winter and things falling apart and trying to see the light at the end of the tunnel.” The song took on a different energy when the trio played it in the studio, and in turn branched out to become the instrumental song “Darkest Clouds,” which precedes “Firewood” on the album. “I always like to have a long instrumental piece and then a song to come in as its companion,” he says. “It can create a cool arc and is an interesting way to tie an album together.”

And yet, bright moments and Ramsey’s optimistic outlook abound. “White Coat” is a shining example of the way Ramsey uses visual imagery from his walks in the woods to write. The specific place he mentions in the song (“You went out across the river to lay down in the sunlight where it filters through the pines”) is an exact spot on his land where he sat while writing it. The song highlights Ramsey’s skill as a fingerpicker and creates space for his haunting voice to climb higher and higher. Elsewhere, “Evening Country” is an updated, country music version of the song “Evening Kitchen” he wrote for the Band of Horses album Infinite Arms and swings with gorgeous harmonies and pedal steel. “For the Morning” ends the album like a sweet, soothing lullaby, transporting the listener—and, as we know, the singer—to a peaceful place of beauty and sanctuary.

For Ramsey, the receiver of far more than that for which he has sought, that space is not some rented respite, nor some transient fabrication. It is home, and it is perfect.