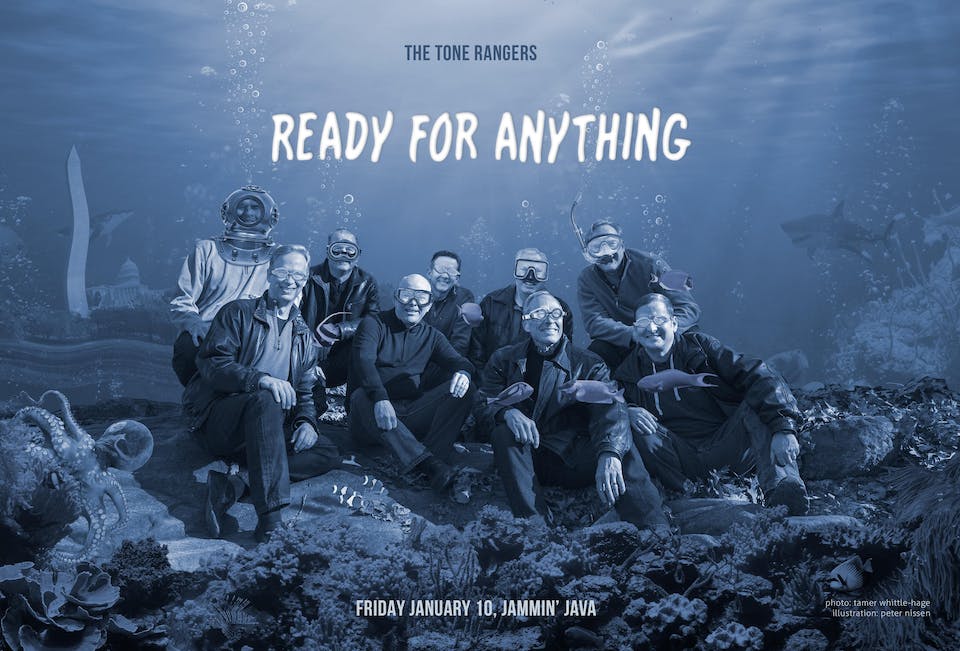 The Tone Rangers: "Ready For Anything” + Doox of Yale

This award-winning Washington D.C.-based vocal group just celebrated their 431st anniversary delighting audiences from coast to coast with its dynamic blend of tight harmonies, inventive arrangements, and keen wit. In a few choreographed minutes, the Tone Rangers propel through 900 years of Western music--from Gregorian chant to classic rock to TV theme songs--in a fresh approach to contemporary a cappella music and comedy. Come see their next performance!

Nominated for many Wammies by the Washington Area Music Association over the years, the Tone Rangers were voted Washington's Best A Cappella Group four consecutive years (2007, 2008, 2009, 2010) and Best A Cappella Recording in 2007! They were also national finalists in the 2002 Harmony Sweepstakes (the Superbowl of a cappella), and three-time winners of Mid-Atlantic "Audience Favorite" and "Best Arrangement" awards. ​

Over the past 65 years, "Da Doox" have grown from a young quartet into a rowdy and incredibly close family of more than 400 singers. In the process, we've become one of the most respected singing groups in the country. We tour internationally, record albums regularly, and charm presidents and preschoolers alike. Doox of Yale, known at the time as "The Duke's Men of Yale," was named one of the nation’s top 5 male a cappella groups by the Contemporary A Cappella Society of America. The group has also placed in the top 4 at the International Competition of Collegiate A Cappella (ICCA) after outright winning the national round. In keeping with our goals to create music that reflects our community, we now invite all singers, regardless of sex or gender identity, to join us in the years ahead. In 2018, we changed our name to reflect this: Doox of Yale.

Today our musical scope goes far beyond our first arrangement. Our repertoire is thrilling, challenging, and diverse: an exciting mix of old favorites and contemporary hits. All arrangements are written by group members which is part of the reason we consistently achieve a unique sound - a product of our incredibly daring and ambitious arrangements combined with our fantastic soloists and our shoe's musicality.

The group has had the chance to share our distinctive sound around the world (live, on television, and through competitions), traveling to Ecuador, Japan, Thailand, China, Jamaica, Turkey, Peru, England, Hawaii, and dozens of other locations throughout the United States and Europe. Doox of Yale has performed at venues ranging from classrooms, hospitals, and conference centers to Lincoln Center in New York City and The White House. We are also an internationally esteemed choral ensemble. In the summer of 2012, Doox of Yale was invited to sing at the International Festival of Collegiate Choirs in Beijing, and in the summer of 2013, the group performed for a festival crowd of thousands on the island of Cyprus. More recently, in summer 2019, Doox performed in three different cities in Ecuador at the invitation of el Centro Ecuatoriano Norteamericano, the cultural exchange arm of the American Embassy in Ecuador.