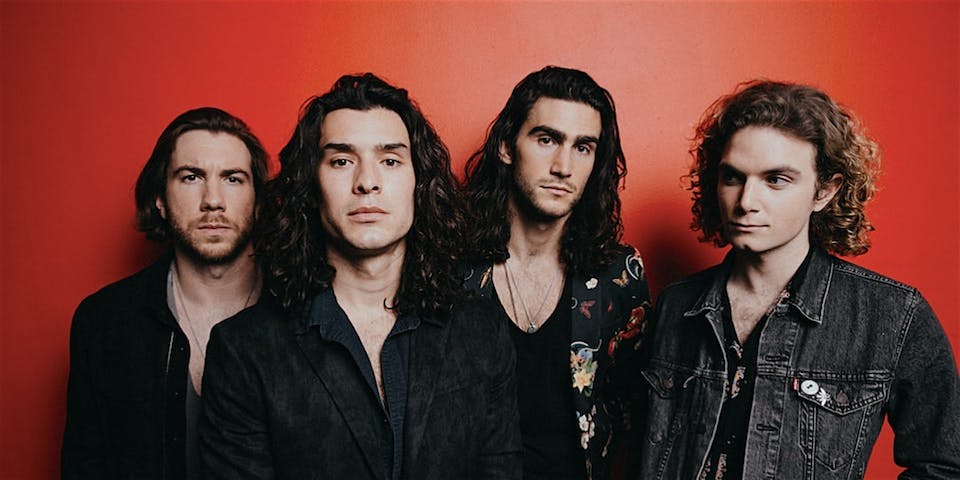 This event has been rescheduled for 9/8/2020. All tickets purchased for the original date remain valid. Please contact us at us@unionstage.com with any questions.

• The Premier Plus section is a raised area with great views and seats at tables. There is a dedicated server for faster service.

When it comes to playing rock & roll, The Jacks simply don't have a choice. "It's what we listen to, it's what we play," bassist Scott Stone says, "and when you stick four guys like us in a garage with instruments, it's just the kind of music we are going to make."

You can hear a primal energy coursing through vocalist-guitarist Jonny Stanback's gritty howl on "Walk Away," the lead single from their debut self-titled EP and the rest of the guys match his excitement with driving riffs and infectious melodies. It's an electric charge that surges through each of the record's five tracks, guiding Stanback, Stone, lead guitarist Thomas Hunter and drummer Josh Roossin when they play together.

“We’re trying to push the boundaries of the rock & roll genre by incorporating modern elements, but still keeping the core structure of a four-piece band,” Stanback says. “We are creating a sound you’ve never heard before, but feels familiar.”

The way they see it, playing rock at a time when pop and hip-hop are dominating the charts is an act of defiance. If any band is poised to help bring authenticity back to rock & roll, it's The Jacks. The quartet has been making a steady ascent since forming in Los Angeles in the summer of 2016, selling out gigs at legendary hometown venues like the Troubadour, Roxy and Viper Room, supporting legends like the Doors' Robby Krieger (who told them personally that he liked their music) and playing major rock festivals like Aftershock and Sonic Temple. At one gig, they ran into John Fogerty who told them, "It's cool to see some rock & roll again."

Now the group has recorded their first EP with producer Matt Wallace (Maroon 5, Faith No More) at Los Angeles' famed Sunset Sound Recorders. But even though they've been playing together for only a couple of years, rock has been The Jacks' lifeblood for as long as they can remember.

As Wallace declares, “The Jacks deliver up lean, rugged rock & roll with songs that feel like instant classics that make you want to move, with earworm hooks and melodies that will have you kinda upset when you find yourself unintentionally and inappropriately humming their songs at work, in church, in court, or at wakes. If the Strokes, Cage the Elephant, and the Stones had an equally talented, but more handsome baby, it would be named The Jacks!”

Hunter and Stone started jamming together on Jimi Hendrix, Led Zeppelin and AC/DC covers in middle school. They kept it going through their college years, and one day when Stone was running sound for an open-mic night, he spotted Stanback. "He had a natural stage presence and a unique voice," the bassist says. "His singing could be growly, but also very sultry." The next day, Stone called up the singersongwriter and said they were supposed to play a house party at the end of the week and asked if Stanback would play with them. The three of them and their drummer at the time got together on a Monday and played their first gig that Friday. They eventually recruited Roossin, who'd gone to high school with Hunter and Stone, to join them on drums when their previous stickman left to pursue another career path. The four of them soon discovered that they shared a unique set of influences – the RollingStones, the Beatles, the Who, Oasis, the Black Keys – and began refining their sound. "The day I finished school, I flew home and had my first rehearsal, right off the plane," Roossin says. “Growing up I had always wanted to play music professionally but never found the perfect opportunity. After playing with these guys, I knew this was that opportunity.”

That's when The Jacks got serious. They started playing around Los Angeles, and eventually the band entered a local radio station’s battle-of-the-bands competition in 2017 – and won a recording contract. Instead, they passed and continued to tour and work on their songs. They waited for the right opportunity, which they got when EDGEOUT Records approached them and put them in the studio with Wallace. The label also set the group up with Grammy-winning engineer Andrew Scheps (Red Hot Chili Peppers, Adele) to mix the EP and bring out group's natural exhilaration.

“Working with Matt Wallace was an incredible experience. He was able to take our vision for our songs and record them exactly how we’ve imagined for the past few years,” declares The Jacks. “And it was a true honor to work with the legendary Andrew Scheps. We couldn’t be happier with his influence on the upcoming EP. We now have an amazing team with EDGEOUT and UMe, and are so excited for the world to hear our music.”

Earlier this year, they were tapped to perform at the NFL pre-Super Bowl and NHL Winter Classic events. For the remainder of the 2019 Stanley Cup playoffs, The Jacks’ music has been chosen to be heard during the games’ broadcasts, highlight reels, and commercial bumpers.

Since the quartet has been able to test-drive their songs on the road, they zeroed in on five that exemplify The Jacks experience for the EP. Lead single "Walk Away" has a big, catchy chorus and lyrics about feeling stuck and trying to move on. “That song is about a very frustrating relationship, where you keep falling into the same routine even though you know you should just get out of it,” Stone says. “It’s time to get out of it, but you keep going back to the same thing over and over and you’re frustrated that you keep doing that to yourself.”

The rest of the songs on the EP also address the human condition. "Who Are You," the bouncy, British invasion-inspired number, finds Stanback questioning somebody’s motivations. “It’s about an obstacle, a rough point for me personally, and I was thinking about how certain things in life are holding you back and how they seem like they are out to get you,” he says. “It’s me asking, ‘What is this thing? What is this force bringing you down?’” "Are You Looking for Love?," with its wailing lead guitar and urgent beat, is like a cousin of “Walk Away” that was born for the dance floor. “It’s about a relationship where you’re not getting serious at all and you’re like, ‘What the hell is going on?’’ Stone says. Stanback adds, “It’s about our lives and trying to be involved with girls and trying to figure that out.”

A bad relationship also inspired "Understand," which features Stanback deciding a relationship has “all been a waste” over a throbbing bass line. The song is about an argument I had with a girl,” he says. “It’s hard when things get emotional.” And similarly, "Hello My Friend" and its lifting vocal line finds Stanback singing about a bad friendship, though this time about a close friend of Stone’s who was struggling with addiction. “It’s my reaction to it and how disappointed I am in the fact that I did not step up and try to help more,” the bassist says. “It has a melancholy feel of ‘We were once great friends and now we’re losing that bond.’ He’s doing better now. Not totally better, but we have rekindled our friendship.”

The mix of songs is fitting since The Jacks got their name from a fan telling them early on that they were "jacks of all trades" when it came to playing different styles and blending their songs with those of their idols. They often performed four-hour shows covering songs from almost every music genre to make money to pay for their early recordings. The moniker also fits because of their diverse schooling and the fact they manage themselves, book their own shows and write their own music, too. Each of these tracks shows off a different side of the ensemble. From the hard-edged rockers to the more melodic numbers, you can hear how the band members have poured their hearts into each of the songs.

The group now has an EP under its belt, along with a reimagined version of the classic holiday carol 'In The Bleak Midwinter', produced by Thom Russo. They've spent much of the last year on the road touring the U.S.; including a slot on the Sonic Temple festival, (playing alongside Foo Fighters, The Cult, Joan Jett & the Blackhearts, the Hives, the Struts, and many others), a West Coast run with The Shelters, and a nationwide tour supporting American Idol finalist Wade Cota on a tour across the USA.

The Jacks Second EP titled 'Remember You' will be released March 6th, 2020 and includes “Just A Little Bit” as the first instant grat track, which will be released on January 24th. That this song closes the EP serves as notice: The Jacks are simply revving up. “Just A Little Bit” opens with drums and bass joined by guitars and evokes out-on-the-open-road energy, shifting into high gear on the opening lyric, “I’ve been chasing something lately…” With nearly 500,000 streams, fans will recall an early version of “Just A Little Bit” earned the band its first signing offer (which they subsequently passed on so they could focus on songwriting), a decision that led to their deal with EDGEOUT Records, spearheaded by veteran music executive Tony Guanci, who signed an exclusive global deal label with Universal Music Group/UMe.

In their own words - “Just a Little Bit is one of the first songs we ever wrote together as a band. Although, we’ve released it before, we felt that recording never captured the energy and sound we wanted from this song. We are so excited we got to revamp an old classic of ours and put a new spin on it. We are hungry to grow and expand as a band and feel it is appropriate to start the new year with a song that’s about wanting a little bit more”

On February 14, their emotional, heartfelt second track “Olivia” will be available as an instant grat track, with a lyric video also premiering. Their lead single, "Threw It All Away", the groove-propulsive rock ‘n’ roll track is slated to come out with an official video on March 6th, along with their second EP "Remember You".

The Jacks’ second EP, produced by multiple GRAMMY® Award-winning producer Joe Chiccarelli (The Reconteurs, The White Stripes, My Morning Jacket, Minus The Bear, Frank Zappa, among many other rock greats), once again delivers original songs infused with their passion for guitar-driven rock n' roll, infused with heartfelt angst (“We Were Only Young”) or soaring anticipation (“The Only One”).

The Jacks are Jonny Stanback (Lead Vocals and Rhythm Guitar), Tom Hunter (Lead Guitar and Vocals), Scott Stone (Bass Guitar and Vocals) and Josh Roossin (Drums & Percussion). They not only pour their heart and soul into everything they do, but they pour their experiences into further defining a sound that’s all their own while harnessing the spirit of their influences (the British Invasion of the ‘60s and ‘70s, Southern Rock)

They played at the Boardner’s By La Belle first Rocker Ball of 2020 in early January and will continue with dates throughout California and Arizona in February and March in advance of festival dates and a summer 2020 national tour.

In the words of guitarist Tom Hunter, ”There isn't an end goal for us, we just want to continue to write the music we love, share it with as many people as possible, and hopefully be remembered for it. We hope that we can one day inspire other musicians to do the same. Oh ... and we want to sell out Wembley."