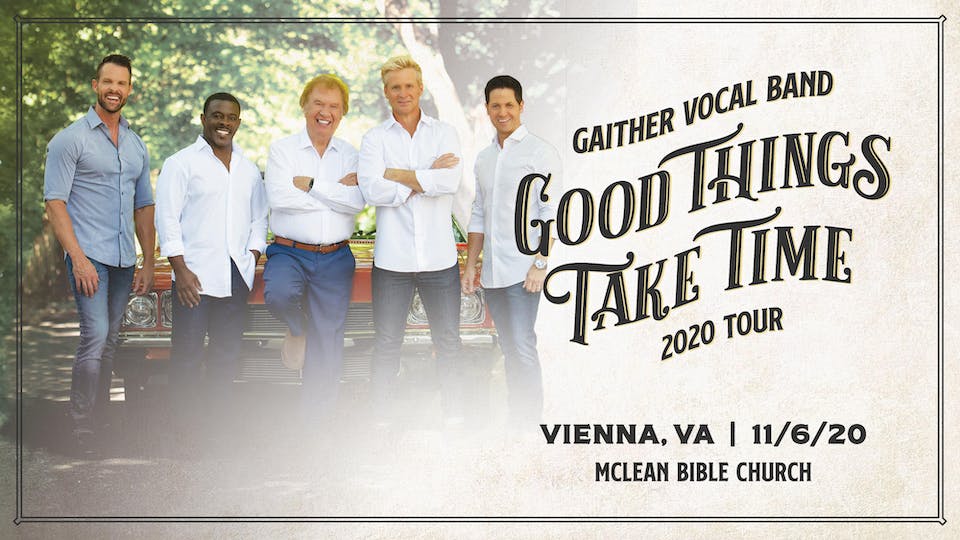 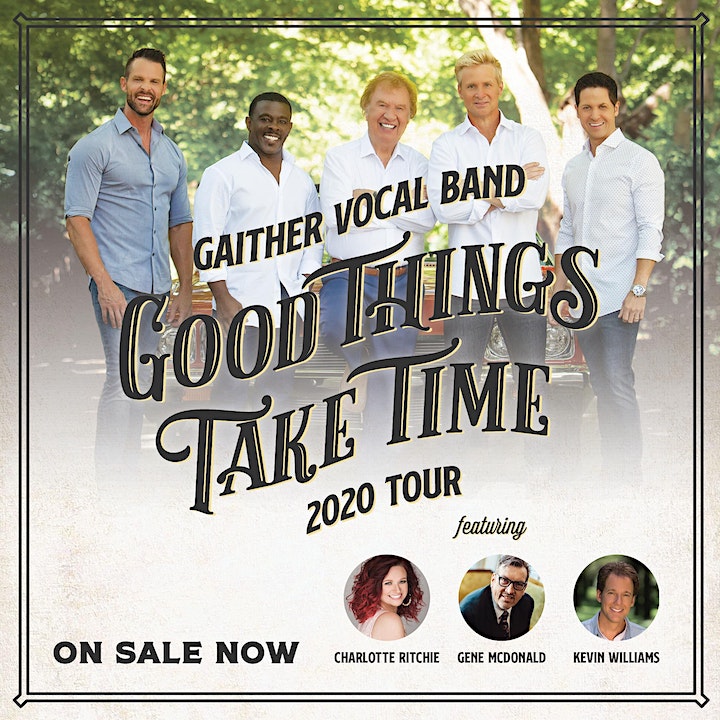 Alexandria, IN - On Saturday, November 6, 2020, at the McLean Bible Church, located at 8925 Leesburg Pike in Vienna, VA, multi-Grammy Award-winner Bill Gaither will host a spectacular evening of music, laughter and encouragement featuring the talent of the prestigious Gaither Vocal Band.

The Gaither Vocal Band will share timeless gospel classics, as well as refreshing, inspiring new favorites embraced by audiences of all ages and backgrounds. Few events have the ability unite individuals from all walks of life the way Gaither concerts do. “The longer I live, the more I learn to appreciate the here and now - this moment - this place in life - this group of people with whom I am privileged to collaborate,” states Gaither Vocal Band founder and bass singer, Bill Gaither.

During the summer of 2019, the Gaither Vocal Band celebrated the release of a new recording, Good Things Take Time, produced by famed country and gospel music performer and studio musician Gordon Mote. The recording is a musical snapshot of a special season for this lauded quintet, featuring Gaither, Wes Hampton, Adam Crabb, Todd Suttles and Reggie Smith.

Year after year, Bill Gaither has brought the Homecoming Tour into cities worldwide, performing to packed houses with collective attendance figures exceeding a million people and being ranked among the top concerts for tickets sold worldwide in any music genre during the past two decades. Each concert showcases gospel music's finest talent and draws new listeners with every city. Joining The Gaither Vocal Band for this special evening will be talented female vocalist, Charlotte Ritchie and powerful male vocalist Gene McDonald, as well as guitarist and comedian, Kevin Williams.

Gaither continues to be delighted by audiences' response to the concerts, now more than 40 years after he quit his day job as a teacher: “I've always said it all starts with a great song, and we are fortunate that each concert includes great songs that have stood the test of time. With all the musical choices that are available now, there is still a special place for the joy and optimism that reside in Gospel music. Good news never gets old.”

Named ASCAP's Songwriters of the Century, Bill and Gloria Gaither have written more than 700 popular gospel songs throughout their multi-decade career, including favorite standards “He Touched Me,” Because He Lives,” and “There's Just Something About That Name.” Since 1992, when Gaither began recording the celebrated Homecoming series of DVDs and CDs, most every volume has gone gold or platinum with sales totaling approximately 100 million volumes. The programs appear regularly on television networks around the world.

This event with the Gaither Vocal Band at the McLean Bible Church in Vienna, VA, begins at 6:00pm and will celebrate timeless themes of faith, unity and eternal hope through a variety of music the whole family will enjoy. To charge tickets by phone or to obtain additional information call 1-877-987-6487.