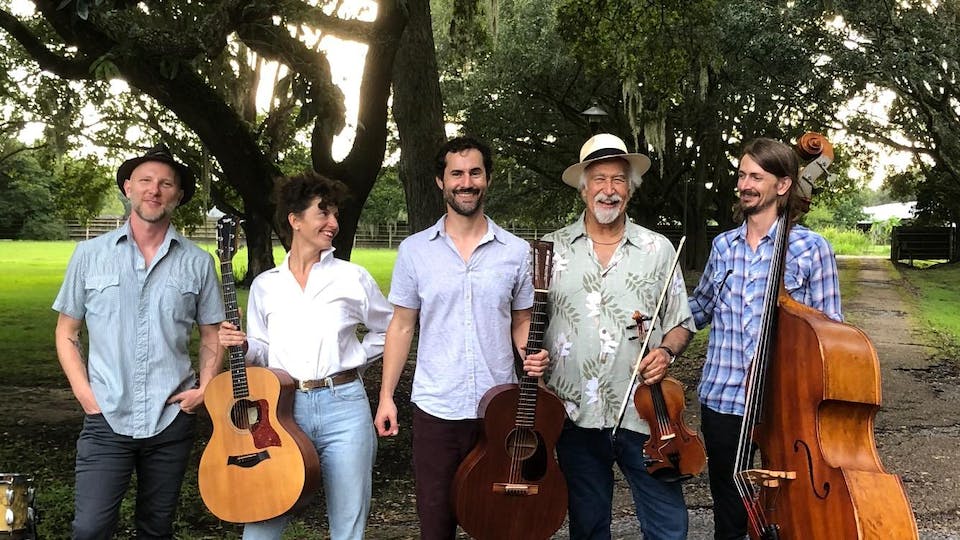 This event has been rescheduled for 8/6/2020. All tickets purchased for the original date remain valid. Please contact us with any questions at us@unionstage.com.

LAFAYETTE, La. — Throughout history, philosophers, politicians, thinkers, leaders, and artists ponder the same question. At one point, they all query, “Why are we here?” Michael Doucet offers what might be the answer…

“To have a good time,” he grins. “That’s why we’re here. It’s pretty simple when you break it down.”

In many ways, the moniker embodies the spirit of these five musicians.

“In French, Lâcher Prise means ‘let go’,” Doucet explains. “It’s also a Buddhist term. When it came to making this music, it was just total freedom. The new songs were different from what I typically do, so we formed a group of great people and musicians. I’ve reached a point in my life and career where I can do whatever the hell I want to do. There’s freedom for everybody because of the mutual respect though.”

Fittingly, the seeds of the band can be traced back to Mardi Gras 2018. Ambling around the streets of New Orleans among friends, Michael found himself at a favorite local watering hole. Amidst the costumed crowd, “a girl in a pink wig and dress” struck up a conversation with him about everything from relationships to music. That girl happened to be Sarah.

Upon sharing some of her music, Michael arranged an informal jam session.

“We played, and it was just magic,” he recalls. “We did our first gig two weeks later. It was funny because when we met after the party, I didn’t even recognize her without the wig,” he laughs.

Together, they tapped into a distinct and dynamic vibe evocative of the region.

“This isn’t necessarily Cajun music; it’s Southwest Louisiana music,” Doucet says. “This is music we like to play, and we have a lot of fun doing it. We let the magic happen. There was a total live feeling.”

The opener “Water, Water” coasts along on waves of fiddle and accordion before culminating on a hummable chant. Under this deluge of energy, the track tells an unbelievable story.

“We obviously have a problem with water in Louisiana,” he says. “About three years ago, there was a thunderstorm over Lafayette and the Parish, raining 24 inches in 24 hours. It flooded everything. I had to go rescue my daughter-in-law. When I came back, my friends got flooded. The chorus just came to me.”

Harnessing uncontainable energy, the group tracked Boozoo Chavis’ “Lula Lula Don’t You Go to Bingo,” with its rollicking rhythms, vocal call-and-response, and Doucet’s spirited fiddle, in just one take. Elsewhere, “Walkin’ on a Mardis Gras Day” strolls through a steady marching-band beat as Michael’s deep delivery takes hold on what he describes as “one of the truest love songs I’ve ever written, in a way — not about losing or gaining love, but just being in love.”

“Bad Woman” integrates a Spanish flair as it paints a portrait of a fiery femme fatale. Then, there’s “Marie Catin.” Alternating between French verses and an English refrain, it nods to tradition as it transmits a relatable message: “You have me under your skin, so you can never forget me, but now I have you under my skin.” Everything culminates on “Cajun Gypsy.” A collaboration with Turtle Island Quartet, the instrumental illuminates both the virtuosity of the Quartet and the ‘Lâcher Prise’ spirit of Doucet’s fiddle.

The new band (an ancillary project to BeauSoleil avec Michael Doucet) reflects the spirit of its founder’s own legacy, while at the same time treading new territory. Throughout a career spanning four decades, dozens of albums, and hundreds upon hundreds of gigs, Michael has fueled the beating heart of Cajun music. Fronting BeauSoleil, he has received 12 GRAMMY® nominations, notched two wins, and made history as the “first Cajun band to win a GRAMMY®.” Along his musical journey Doucet has shared stages with Dr. John and Allen Toussaint, among other greats, and beyond legendary festival sets, the group appeared on the HBO series Treme and earned acclaim from The New York Times, NPR, The Boston Globe, and others. As a fifth generation Acadian, he remains a staunch historical advocate as well. The National Endowment of the Arts exalted his work with a prestigious National Heritage Fellowship, and United States Artists bestowed upon him the Berresford Prize/USA Fellowship in 2007.

“My aura, my life, and my music are wrapped up in this culture,” he says. “I want to lay a groundwork for young people to learn about it. The culture permeates me. That’s my philosophy. I’m being true and transparent.”

Lâcher Prise ultimately provides another avenue for the expression of his truth.

“Some of the record is cerebral, but it’s got a different feeling overall,” he leaves off. “All of the musicians are amazing. It’s not just my record; it’s ours. I have so much confidence in those guys and gal. Most of all, I hope everyone has as much fun listening to it as we did making it.”

I understand that by purchasing a ticket to this show I accept the potential risks, including, but not limited to the potential short-term and long-term complications related to COVID-19, and will not hold Brindley Brothers LLC liable.