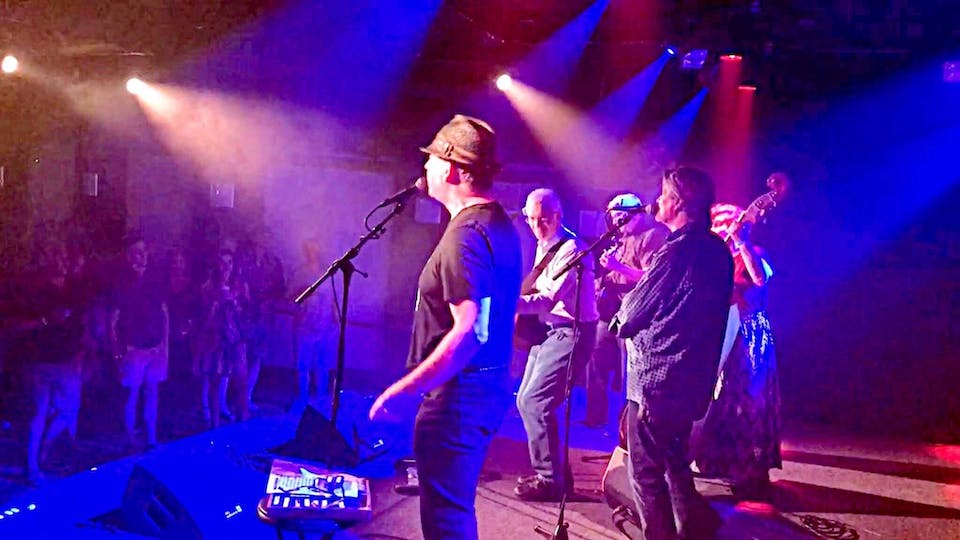 - Although based in DC, King Street Bluegrass’ members have rural, farm and coal miner family roots from the mountains of West Virginia, Pennsylvania and Southern Virginia.

In 2014 lead singer and ace banjoist Robert Swain had a devastating stroke, which took away his speech, his right side, and nearly his life. The band wouldn't quit, from creating conga lines in ICU, to having him sing baritone at shows immediately upon his hospital release. His recovery has been remarkable. Their Latest album celebrates his journey (and the bands) recovery.

Hailing from the darkest hollows of Northern Virginia, Split String is a veritable Soup of musical influences all mixed together. From traditional bluegrass to classic rock and country, and even a few contemporary influences, Split String Soup creates an eclectic Americana sound all their own.

Rich, a native of Roanoke, Virginia, learned to play guitar at the age of twelve from his father (whom he credits as his greatest musical influence). Playing rock and folk for years, he became focused on bluegrass and old time in 2003 while taking a college course guest-taught by Mike Seeger. He has since led several bands. Shortly after moving to Northern Virginia in 2007, Rich reunited with former band member, Nate Edwards, to form Gallows Road. Split String Soup was soon to follow. He sings lead and plays both a hard-driving bass and a soulful resonator guitar.

Born in the backwoods of Newport, Rhode Island, Nate began playing guitar a few years ago at age sixteen and studied under Tim Olbrych. A fan of all musical genres, Nate’s influences range from punk and ska, to metal and rhythm & blues — hints of which are evident in his unique approach to bluegrass.

She’s Canadian, she plays fiddle, what more is there to say! Stacey is originally from Canada, a country with a long history of fiddle music. She blends this influence with her classical violin training when she plays American Bluegrass. Stacey is a founding member of Split String Soup, and performs with several other area bands. Stacey also teaches the next generation of musicians as a violin instructor at Reston Music and has coordinated children’s activities for Shepherd’s Ford Productions at Watermelon Park Bluegrass Festival.

Josh Ungar, born and raised in the DC metro area, plays mandolin and bass as well as singing lead and backup vocals. Josh has performed in multiple bluegrass, Americana, and rock bands. Josh was a founding member of the Porch Pickers Brigade as well as Split String Soup. Josh currently works for the McCoury’s as an assistant for the Delfest Academy, continuing this tradition for the last 5 years. In 2010 Josh placed 3rd in the Watermelon Park Festival mandolin picking competition.

Steven has been playing various different percussive instruments over the last 15 years, with his latest weapon-of-choice being the cajon, a Spanish box-shaped hand drum. He joined the group a few years ago, adding a steady rhythmic element on either bass or cajon, and singing a few leads as well.

Split String Soup frequently collaborates with a variety of top-notch area musicians. From percussion to banjo to mandolin, and more, Split String Soup is ready to meet the needs of any venue or occasion.