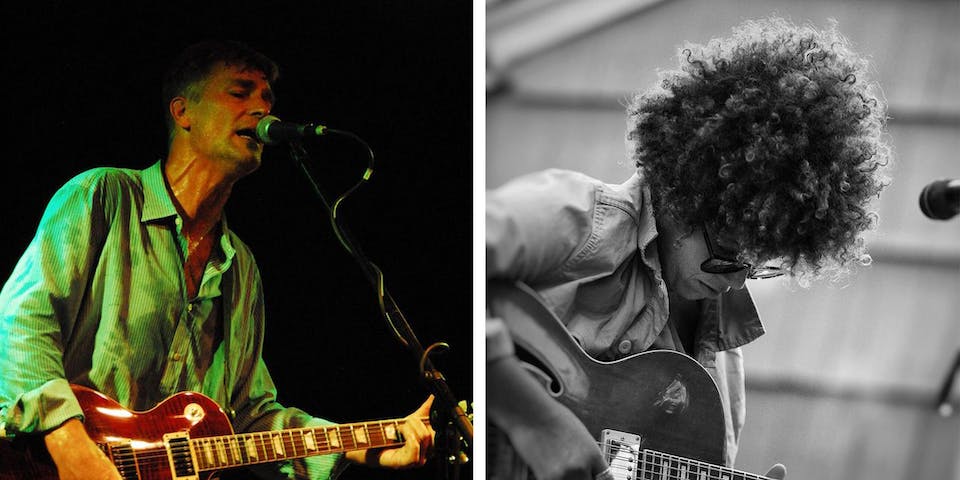 Jonathan Mudd & The Powers That Be + Chastity Brown

Jonathan Mudd is a Washington, DC-based singer/songwriter/guitarist. Over the years, he's made his home in Chapel Hill, NC, Atlanta, GA, and San Francisco, CA, recording and touring with The Shake, Land of Giants and Jo Jo Ex-Mariner before going it alone.

Jonathan’s 2010 follow-up was "Truth Lies.” A four-star review in Blurt raved: “'Truth Lies' has all the requisite power-pop hallmarks: meaty guitar riffs atop propulsive rhythms; instantly hummable melodies and a keen sense of dynamics; lyrics about loving and losing and getting back together, all with an undercurrent of reflection and redemption.” The Washington City Paper pointed to "Run Amelia" as the album's stand-out track: "a slinky power-pop kiss-off laced with a chunky, riff-addled chorus...this N.C.-bred power-popper's mendacity anthem is the truth."

“Evidence,” released in January of 2017, featured ten big-hearted songs that came big on the grooves and heavy on the hooks. Wrote critic Fred Mills in his four-star (out of five) review of the album: "What [Mudd] is doing is demonstrating an uncommonly confident mastery of the pop form, from the songs’ arrangements (dude has more hooks than a bait and tackle shop) to the glistening production."

Jonathan's latest effort is 2019's "(re)animate," a stripped-down affair that re-imagines the very best of his songs as intimate acoustic arrangements. The album is delicately colored by a wide array of acoustic and electric instruments--from pedal steel and piano to cabasa and cajon, from dobro and trumpet to synthesizer and ukulele.

Over the course of his career, Jonathan has played venues small and large, including The Birchmere, The Fillmore, The Hamilton, The Barns at Wolf Trap and Jammin' Java in the DC area; the Rialto Theater and Cat's Cradle in North Carolina; The Point and Cotton Club in Atlanta; and 108 Masonic in San Francisco. When he's not playing his original music, he can be heard on tour nationally with the Beach Boys tribute act Still Surfin'.

Based in Minnesota, but with roots in Tennessee, Chastity Brown grew up surrounded by country and soul music. In the full gospel church of her childhood, she played saxophone and drums and found her singing voice and a passion for music. Her first show was in Knoxville, TN, and then it was on to Minneapolis. Since then, she’s been featured on NPR’s “Favorite Sessions,” CMT, American Songwriter, the London Times, Paste Magazine and others. Chastity has toured the U.S. and abroad, appearing on the U.K.’s Later…with Jools Holland.

“What I’ve realized is that the personal is political,” Brown said in a recent interview. “Just by me being a biracial, half-black, half-white woman living in America right now is political. Just being a person of color, a queer woman of color, for that matter, is freaking political. My focus, as far as this record, I guess it’s really been psychological. I’m really intrigued by the perseverance of the human spirit and the complexities and contradictions that we embody as human beings."

It was a chance encounter with a white supremacist that was the impetus for Chastity Brown's new single, "Mad Love." The bi-racial artist was confronted outside a club in Eau Claire, WI having a quick smoke before taking the stage where she was accosted, cussed out and verbally attacked by a person who'd read her interview in the local paper. Her guitarist, Robert Mulrennan, came out and to find Brown standing up for herself and holding her own. Shaking with adrenaline, fear and anger, Brown went and did the show and shared the story with the audience. She realized the best possible response to racism and hate is love -- including radical self love where, no matter how others choose to see you, you accept yourself.

With this incident in mind, Brown wrote "Mad Love" as an anthem for forgiveness and self-acceptance and as a statement of pride. Choosing love over hate, the Southern-born, Minneapolis-based songwriter refuses to see herself through the eyes of people who'd diminish her or judge her based on her skin color or sexual preference. It's a call to arms to step back from the fear and anger and respond with a tidal wave of positivity.

Brown recently made her Bonnaroo Music Festival debut, has toured extensively with Ani DiFranco and Andrea Gibson and had her most recent release, SILHOUETTE OF SIRENS, chosen as an NPR “First Listen.” She’s been featured extensively on MPR The Current. Melding folk, roots, and soul music with topical lyrics, her music seems especially timely.

“I think it’s about different types of heartbreak, and how one deals with it,” Brown says of her recent album Silhouette of Sirens. “And not the heartbreak of a coupled relationship; just living life, and the experiences that break your heart. There are these moments on the album where it’s like, ‘this is intense.' And then hopefully, there are moments where it’s alleviated — as I feel like life is. Life is hard. Every tree, every plant, everything you see in the natural world, just through a growth process, you see how hard it is to grow and bend towards the light."