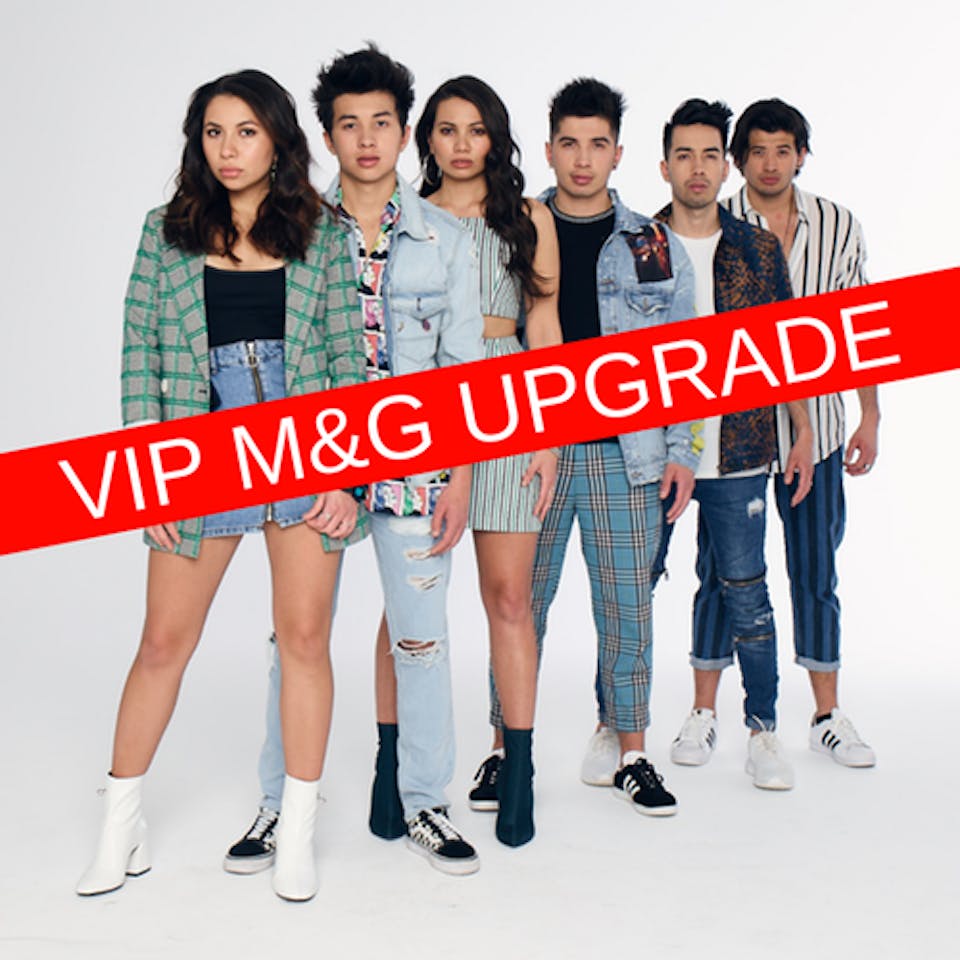 Meet and greet were fans can take individual photos

* Does not include a ticket to the show - must be purchases separately.

With their catchy choruses, pure vocals, and dynamic routines, JAGMAC is set to take the music world by storm! These siblings' unique blend of talents include: singing, songwriting, dancing, choreography, rapping, playing musical instruments, sign language. And probably most impressively, every member of JAGMAC holds a black belt in Taekwon-Do, and four members of the group are two-time world champion black belts in the Philippine martial art, Eskima.

With a slew of major accomplishments already to their name, JAGMAC kicked off 2018 with a special guest performance on the Emmy Award-winning FX series “Baskets.” They’re releasing their highly anticipated new single, “Right Back With You” this spring, and are performing at various shows and festivals across the US this summer and fall.

From funk and soul, to pop, rap, jazz, and rock & roll, JAGMAC grew up in an eclectic musical household, and these influences can be heard in their musical style and lyrics. The group co-writes all of their songs and have been in the studio penning a new album (scheduled to come out early fall 2018) with many of the industry’s top writers, including: Lauren Christy (Avril Lavigne, Bebe Rehxa, David Bowie) Pam Sheyne (Christina Aguilera) Bryan Todd (Miley Cyrus), Ben Adams (Craig David) and Manny Streetz!

In 2015, JAGMAC premiered their debut music video “Existence,” which was soon followed by the hits, “What’s Right With Me” and “Get Your Groove Back’, all while embarking on a series of UK performances that included performing at the famed Wembley Arena.

With their international fan-base growing, 2016 saw JAGMAC support ‘Little Mix’ on their sold out UK arena tour, and the group's heart-thumping track, “Soldiers” climbed to #15 on Billboard’s Hot Club Chart! Soon after, JAGMAC were invited to perform at ‘Promo Only Summer Sessions’ in Atlantic City, one of America’s most exciting industry showcases! The siblings performed for A-list US radio programmers, producers, DJs and record executives, following in the footsteps of past 'Summer Sessions’ performers that included Lady Gaga, BeBe Rexha, Timbaland, and Rita Ora.

JAGMAC is currently in Los Angeles working on their newest project and preparing for their 2018 summer tour. When they’re not on the road, the siblings reside at their home in Baltimore, MD, teach martial arts, and cook lots of family meals ... as they prepare for musical world domination!