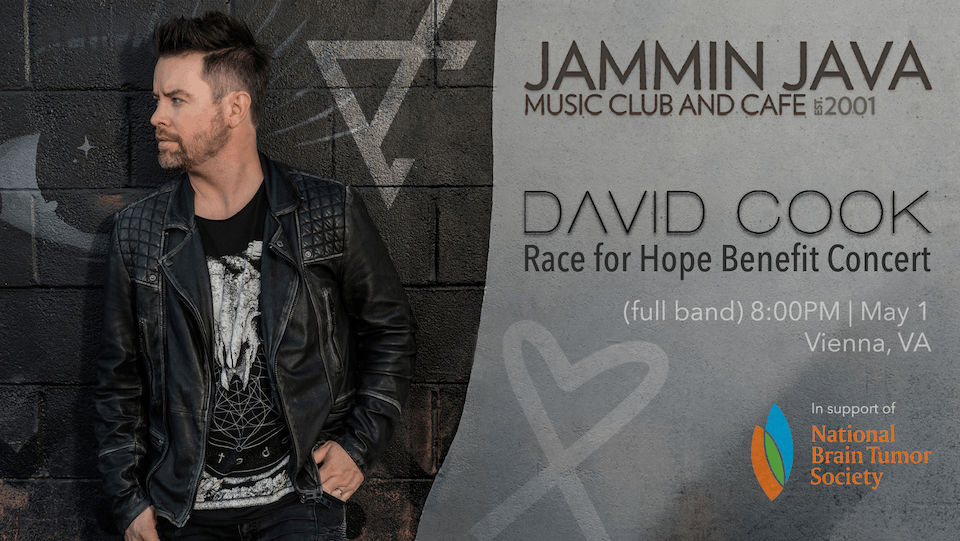 100% of the proceeds of this concert benefits David Cook’s Team for a Cure at the 2020 Race for Hope – DC. The Race for Hope-DC, a 5K course in the nation's capital, is one of the largest fundraisers in the country benefiting the brain tumor community and the proceeds support the National Brain Tumor Society. David and his fans have raised close to $1.5 million since 2009 in support of this cause!

After a decade of cutting his teeth in the trenches of the Midwest music scene, David Cook immediately launched to stardom following his American Idol Season 7 win – breaking several Billboard chart records when 14 of his songs debuted on the Hot Digital Songs chart and 11 of his songs debuted on the Hot 100. Cook has since gone on to sell more than 2 million albums (including his platinum-certified eponymous album) and, collectively, more than 5 million tracks (including two platinum-certified singles) worldwide. After a move to Nashville, TN, David continued to find success, not only for himself (his 2015 studio album, DIGITAL VEIN, debuted in the top 5 on the Billboard Pop Chart), but also as a writer for other artists. Cook continues to tour throughout the world in support of his multiple hits. 2018 brought an exciting new EP from Cook – CHROMANCE, featuring the single Gimme Heartbreak – and also marked David’s Broadway debut, starring as Charlie Price in the Tony Award-winning Broadway hit musical KINKY BOOTS. And this past fall, Cook kicked off a highly-anticipated Acoustic Tour and released his first new music since starring on Broadway with his single, Death of Me.