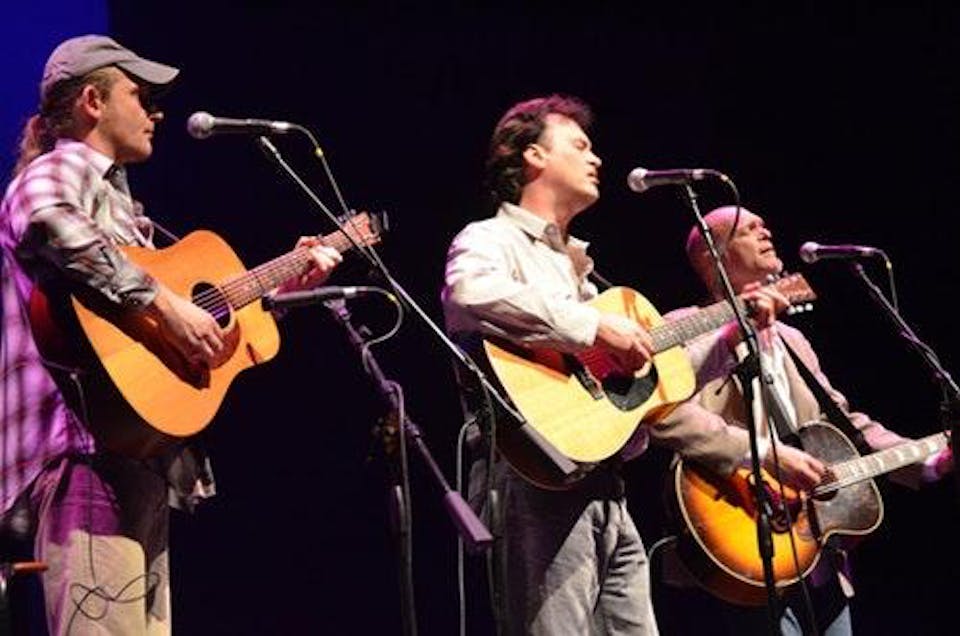 Eric, Peter, and Thomm have once again combined their forces to create a singular new record, Riverland, their second as a trio, after the 2017 release, Profiles in Courage, Frailty, and Discomfort.   Released January, 2019, on Eric’s East Nashville-based label Red Beet Records, Riverland is fourteen interconnected tales of the Mississippi River and the state of Mississippi. Songs about its people, its water, its history, its past, its magic, its madness, its beauty.

While their first album was just Eric, Peter, and Thomm – nothing but their acoustic guitars and their voices – Riverland finds the boys once again working with frequent collaborators Mark Fain (bass) and Lynn Williams (drums), and features significant contributions from the Steeldrivers’ Tammy Rogers (fiddle), banjo players Justin Moses and Terry Baucom, and legendary mandolin player Mike Compton.

Why Mississippi? Start with the impact of the river and the state on American life, culture, art, and politics. These boys are a Southerner, a non-Southerner, and an ex-German, but they’re all students of history, of the passage of time, of the forces that shape our culture. They’re aware of the brilliance and fragility of “The American Experiment” especially as it manifests in Mississippi. They share a love of Mark Twain and John Hartford, Faulkner and Willie Morris, the blues and string bands. All of this and much more finds its way into Riverland.   Through thirteen new compositions (and one devastating cover), you’ll hear about the Great Flood of 1927; the adventures of a traveling mule; the twilight years of legendary keelboat man Mike Fink; the farmer fighting to keep his family’s land; General Ulysses S. Grant’s plan to change the world by taking Vicksburg; and you’ll learn about the Reverend Will D. Campbell. The centerpiece of the record, “Mississippi Magic,” is a song written by the late Rev. Campbell, reflecting on his time working for equality and racial justice in the south over the course of a lifetime (a life that included a deep friendship with songwriter Tom T. Hall, which is reflected in another song on the record, “Tom T. and Brother Will”). That track includes part of a conversation that Tom T. recorded with Brother Will, discussing the 1962 desegregation of the University of Mississippi.

In this record, you’ll feel the currents of the Big River, and you should just give into them, and jump in.

Eric and Peter have recorded and toured together for a decade now, and their last two duo albums were recorded in Thomm’s studio, with Thomm in the role as recording engineer, producer, guitarist, and harmony singer. Whenever they could, they took Thomm on the road, a sideman extraordinaire whose sublime flatpicking guitar style elevates anything Thomm weaves it into. But Eric and Peter knew that Thomm was also a world class songwriter, and they kept twisting his arm to take front-and-center during their shows and sing a few of his own compositions. It was only a matter of time before the duo-into-trio transformation became official with the 2017 release of Profiles in Courage, Frailty, and Discomfort, fourteen songs by all three members, tackling such weighty topics as moonwalks, steamboat captaining, dollar-slots, Johnny Cash’s gravesite, Jerry Lee Lewis’s birthplace, Willie Nelson’s notions of eternity, the downside of Parkersburg, West Virginia, and a Tennessee town flooded for the sake of electricity.   Eric, Peter, and Thomm each has something distinct and slightly skewed to say about the world, and when they bring their singular perspectives to the trio table, it’s a perfect example of a whole being much greater than the sum of its parts. And what parts they are!

Eric began his musical career in Washington D.C. where he was a journalist with The Washington Post. There, he launched his acclaimed roots-rock band Last Train Home in the late ‘90s, touring with the group extensively across the U.S. and Europe, releasing seven albums and one concert DVD. The band moved to Nashville in 2004, where Eric met Peter Cooper, an award-winning journalist who covered music for The Tennessean newspaper. They began a part-time duo, which soon became a nearly full-time thing, and so far they have four records to their name, all released on Red Beet Records.  He has also written an acclaimed musical on the California Gold Rush, called Hangtown Dancehall, and released an album of old French songs (in honor of his French father) called Cartes Postales.

Eric and Peter were nominated for a Grammy for producing I Love: Tom T. Hall’s Songs of Fox Hollow, their 2011 release on Red Beet Records that featured them, along with Patti Griffin, Bobby Bare, Jim Lauderdale, Duane Eddy, and Tom T. Hall himself, all reprising tunes from Hall’s classic kids record of 1974, Songs of Fox Hollow.

In the past ten years, Peter Cooper has been absurdly prolific, releasing four solo albums on Eric’s Red Beet Records label, four duo albums with Eric, two trio albums with Thomm and Eric, all while producing two albums by Fayssoux Starling McLean, one by Jason Ringenberg, and that Grammy-nominated children’s album, I Love: Tom T. Hall’s Songs of Fox Hollow.

Cooper was the longtime music writer for Nashville’s Tennessean newspaper, and is currently a writer and producer for the Country Music Hall of Fame & Museum in Nashville. There he curated the stunning current exhibit “Outlaws & Armadillos: Country’s Roaring ‘70s,” which is a not-to-be-missed stop the next time you’re in Nashville.

Peter’s latest creation, other than Profiles in Courage, Frailty, and Discomfort, is a superb book of true Nashville tales, called Johnny’s Cash & Charlie’s Pride: Lasting Legends and Untold Adventures in Country Music. Out on Spring House Press, it’s some of the best music writing you’ll ever read, Peter’s conversational style packs a ton of information – from hilarious to tragic to essential – into his never-before-heard tales from Music City. Well worth getting and reading.

Thomm Jutz made his way to Nashville in 2003, something he had dreamed about for years. When he was a 13-year-old kid watching TV in his family home in the Black Forest of Germany one night, Bobby Bare came on a German variety show and sang his hits “Detroit City” and “Tequila Sheila.” Like a bolt from above, young Thomm knew right then that he was going to play guitar and move to Nashville. Twenty years later, he did just that.

In Nashville, Thomm immediately became an indispensable sideman to acclaimed artists Nanci Griffith, Mary Gauthier, and Maura O’Connell. After building a recording studio he has become one of the most sought after producers of acoustic music in Music City, with production credits on albums by Nanci Griffith, Jason Ringenberg, Sid Griffin, Mac Wiseman, and many more.

Thomm has produced, engineered, and played on the last two Brace-Cooper albums, The Comeback Album, and C&O Canal, as well as Peter Cooper’s last solo release, Depot Light: Songs of Eric Taylor.  Thomm’s spectacular guitar playing has added a virtuosic dimension to Eric and Peter’s live performances and arrangements, while his harmonies and lead singing add vocal richness to the shows.

He has also joined the short list of writers such as Joseph Conrad and Vladimir Nabokov whose works in their second language of English are as evocative as anything a native speaker can conjure. To grasp the truth of that, listen to Thomm’s three albums of original music about different episodes in the Civil War, titled The 1861 Project, volumes I, II, and III. They feature such artists as Bobby Bare (yep, they’ve become friends), Marty Stuart, Jerry Douglas, and Kim Richey, and are astonishingly evocative.

Thomm is also one of the most successful songwriters in the bluegrass world, having charted nine #1 bluegrass chart hits over the past two years (as recorded by Shawn Camp, Irene Kelly, and Chris Jones & the Night Drivers, and others), and has had fifteen more compositions in the bluegrass radio top twenty.

His 2017 solo album Crazy if You Let It, his 2015 duo album with Craig Market, Nowhere to Hide, and his 2016 solo album, Volunteer Trail, are all gems of song craft, arrangement, and acoustic guitar work.  Thomm has been nominated as bluegrass music’s “Songwriter of the Year” for 2018 and 2017.

Together, Eric, Peter, and Thomm weave stories, songs, harmonies, and guitar playing into something very special. The lyrics are as thoughtful as those of their heroes, a list that includes John Prine, John Hartford, Kris Kristofferson, Tom T. Hall, Paul Simon, and Townes Van Zandt. Add harmonies that bring to mind the Seldom Scene, Emmylou Harris, and the Everly Brothers, and sumptuous guitar arrangements, and you have a truly memorable evening of music.